Make Your Bets!When Maths Steps In

What tools can mathematicians use to describe and even make use of it?

The exhibition Make Your Bets! When Maths Steps In takes  an  entertaining, interactive  approach  to  randomness,  providing  visitors  with  a  better  grasp  of  this supremely  useful  concept.
The  exhibition  examines  the  role  of  chance,  probability and chaos in everyday life, games, culture and even cryptography.

The  idea  of  chance  has  fascinated  humanity  since  time  out  of  mind,  but  serious  study  of  it  only began quite late on in the history of mathematics. Naturally. What could genuinely be said about events which seemed inherently impossible to predict? Moreover, in many cultures – ancient or not –  chance  has  been  associated  with  magic  and  gods,  factors  that  are  difficult  to  integrate  in  a rational approach.

Yet for nearly two centuries now, the idea of chance has played a key role in many areas of scientific
research. Tools developed by mathematicians have become essential to all scientists, since they can be used to make predictions that will almost certainly prove accurate.
So how can we calculate the probability of an event occurring? How can we mine data from a large number of random events? What do we mean when we refer to ‘chance’?

The largest section of the exhibition is devoted to probability. How is it calculated? In the simplest situations, the answer is quite intuitive: we only have to calculate the number of ‘positive’ cases and divide it by the number of possible cases. So the calculation of such probabilities involves counting all positive cases precisely.

Yet  the  calculation  of  probabilities  can  bring  surprises.  Some  very  likely  coincidences  or  even certainties seem extraordinary, while lotteries –with their mathematically infinitesimal chance of winning– continue to be remarkably successful! To explain probability, the exhibition presents dice used in an unexpected way, a game of mini-Monopoly, an application that can decipher a coded message and a lottery in which there is 1 chance in 14 million of choosing the right 6 numbers from a set of 49!

An exhibition created by the Mathematikum de Giessen (Germany) and adapted by Universcience in partnership with the Geneva Museum of the History of Science (Switzerland). 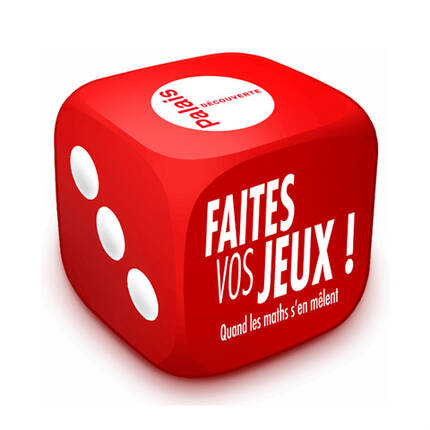